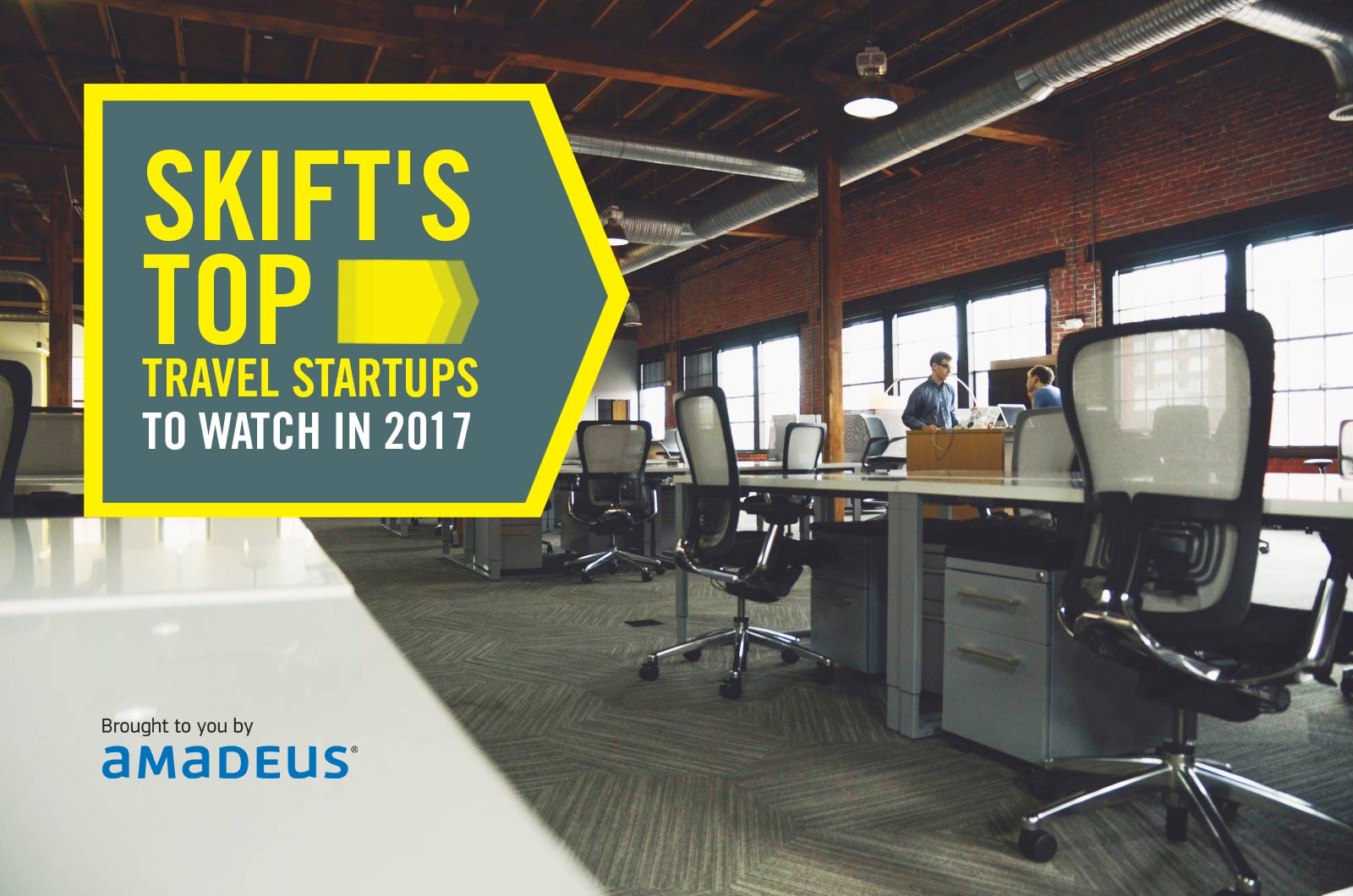 LodgIQ was recently named as one of 17 top travel startups for 2017 by Skift (Repost of the original article with permission from Skift).

This list is Skift’s first attempt at spotlighting the most impressive new or little-known travel startups worldwide. (It’s also our first shot at trolling Silicon Valley.)

We are drawing on the knowledge we have gained through five years of coverage of hundreds of newly launched travel companies.

Our list of 17 top startups in 2017 spotlights a mix of consumer and business-to-business models, with a few that derive revenue from both.

Some of these companies are profitable. Most aren’t. We believe all of them address problems that are legitimate enough that customers will pay for their solutions, in due course, and that their number of potential customers is large.

We are avoiding companies that are well-known through splashy and expensive marketing. To help with that, we only include startups that have raised less than $15 million in funding.

Other factors we keep in mind: We want companies whose core teams have strong technical and commercial skills. We are excluding companies that — however young, smart, and profitable — aren’t likely to rapidly scale up revenues at a faster rate than costs.

We feel this list is fairly representative of the industry innovation that travelers will benefit from soon.

Note: The list is presented in alphabetical order rather than ascending or descending order. The chart below offers additional detail about the funding level of the startups, staff sizes, and whether the company is consumer- or business-facing (or somewhere in between).

The size of the yellow spheres represents the size of a company’s staff; the larger the sphere the higher the headcount

AirHelp
New York, N.Y.
Like a travel lawyer on speed dial
Consumer laws in Europe and elsewhere entitle passengers to receive compensation from airlines when flights are severely disrupted. Yet perhaps only 5 percent of travelers file the paperwork to claim their rightful money. Since its launch four years ago, AirHelp has stepped into the breach by processing claims on behalf of 2 million consumers, while taking a cut of the refunds. The startup has an edge on its rivals (such as Flightright, ClaimCompass.eu, Refund.me, and WeClaim) by having raised more than $12 million in funding, having about 450 workers across seven offices, and having been schooled in the YCombinator incubator that gave Airbnb its start.

Alice
New York, N.Y.
Like a shared hotel to-do-list for the post-Walkie Talkie era
Created four years ago, this seller of a hotel operations platform has 55 employees and has raised $13.5 million, with Expedia as a minority investor. Alice provides one system for guests, front-of-house workers, and back-of-house staff to communicate and track requests. The unified system means that a guest request via a text message for, say, more linens, is conveyed to the right worker. Guests can also order services through mobile apps and other methods.

Baoku
Beijing, China
Like Asia’s version of KDS
China’s corporate travel sector hasn’t seen innovation the same way the country’s consumer travel market has with Ctrip, Tujia, and other brands. Baoku is rectifying that. Thousands of companies, such as China Construction Bank, COFCO, and (HNA-owned) Hainan Airline Sales, use its online travel management tools. Since 2014, market leader Baoku, with a headcount of 200, has raised about $10 million (68 million renminbi) in financing from CBC Capital and Matrix China Partners. This year it plans to link up with more international resources and start a supply chain financing service.

Flyr
San Francisco, Calif.
Like Moneyball applied to travel
This analytics company analyzes travel patterns to create innovative insurance-like products that give travelers more flexibility. Its best-known product lets a traveler lock in the option to book a fare at today’s price next week — handy if he or she wants more time to decide. The 25-employee company distributes its products through airlines, online travel agencies, and travel management companies. Flyr has raised more than $14 million to date, and its investors include Amadeus Ventures, JetBlue Technology Ventures, and Thiel Capital.

Freebird
Boston, Mass.
Like an on-call airline gate agent
If a traveler’s flight is canceled or significantly delayed, Freebird promises to rebook them on any airline at no additional cost. It offers a limited consumer service on its website. But this company, which has ten full-time employees and which has raised $3.5 million, emphasizes sales of its services via travel management companies. Casto Travel and Corporate Traveler are adding its service by May, and more than ten other companies are in the pipeline.

Gopili
Rennes, France
Like a Skyscanner for rail, bus, and car-share as well as plane
French company Kelbillet started out as a site for swapping unused train tickets. But it morphed into a multi-modal travel search engine. Then it went pan-European under the brand name Gopili. In 2016, the combined brands processed more than 70 million euro of business volume — a promising start for a profitable company that has only raised about 2.2 million euro.

Hotels.ng
Lagos, Nigeria
Like an Expedia for West Africa
Founded in 2012, this online travel agency has since processed millions of bookings, raised $1.425 million, and grown its staff to 72. In February it added flights search. The company faces fierce competition from travel search sites Jumia, Travelstart, and Wakanow. It also doesn’t help with revenue that Nigeria’s air transport system is currently in disarray. Yet Hotels.ng will win if it keeps its costs in line with revenue and keeps adapting.

IreckonU
Amsterdam, The Netherlands
Like a mobile-first hotel command station
Whether an independent hotel or small chain is tiny, large, or in-between, it typically uses a generic property management system (PMS) to run the show. Software maker IreckonU has built a middleware solution that connects to a PMS, optimizing stability and use of guest data. Its first big customer is the CitizenM chain, all nine of whose properties are using the startup’s operations and finance dashboard. The chain is also testing iReckonU’s new revenue management system this year. IreckonU has 35 employees. Microsoft has been supporting it marketing-wise and commercially.

LocusLabs
San Francisco, Calif.
Like an enhanced Google Maps for airports
This startup only debuted its platform in late 2015, yet its enhanced maps are already found in the mobile apps of more than a dozen of the world’s largest airlines, including American, Delta, JetBlue, Lufthansa, and United. It’s working on on-premise location map displays for several major airports. It has created “centimeter-accurate” interior maps of the stores, products, and services (like ATMs) for more than 70 airports worldwide by using depth cameras, lasers, and other sensors. It has received $3.5 million in funding, with investors including SITA, the research-and-development arm of the airline industry.

LodgIQ
New York, NY
Like an IBM Watson for hotel revenue managers
Hotels are recognizing the need to invest in software tools to manage demand and set rates optimally, and companies like Duetto and IDeaS are serving the large hotels, resorts, and casinos, while Booking.com’s BookingSuite is targeting small hotels. Aiming at the middle market of independent hotels and small chains, LodgIQ has come up with software —in basic and full-feature versions — that more than 500 hotels have adopted since the company’s debut a year ago. LodgIQ, which has 45 employees and $5 million in funding, anticipates revenues to reach the $40 million-a-year range within three years.

Mileslife
Shanghai, China
Like a mileage card for your phone
Asia’s middle class is developing an irrational passion for frequent flier miles and hotel loyalty points just like the irrational passion that swept the U.S. middle class. Mileslife is an app that helps consumers make the most of this new currency. The app lets consumers collect miles and hotel points via shopping for retail merchandise, dining out, and making many other purchases on their mobiles. It also lets users cash in miles and hotel points on lifestyle and travel merchandise. It launched a year ago and now averages 6,000 transactions a month. The 42-employee company, which has raised $1 million, has cut deals with several carriers, such as British Airways, China Southern, Lufthansa, Singapore, and United.

Repup
Gurgaon, India
Like a Medallia for India
Few things keep a hotel general manager awake at night as bad reviews at online travel sites like TripAdvisor, MakeMyTrip, and Goibibo. Many companies, such as Medallia, RateGain, Revinate, ReviewPro, and TrustYou, have built profitable businesses in helping hotels engage with guests while they’re still on a property and helping them respond to reviews after guests post them. But online hotel booking in India is still a vast new market. So in late 2014, Repup debuted with software tailored to regional needs. TripAdvisor has certified the company as a trusted partner. Brands like ITC, Lemon Tree Hotels, and Sarovar Hotels, have signed up. The 46-employee company has raised an undisclosed seed round.

Tiqets
Amsterdam, The Netherlands
Like a Ticketmaster for museums
Dragging the old-school, paper-based attractions sector into the digital age, Tiqets makes last-minute tickets for museums, tours, and events instantly bookable online. After two years in the market, the 70-employee business — which has raised $5.45 million to date — has signed up many of Europe’s most popular venues. The startup balances its commission-based business with reseller services for hotel chains and other companies. (Skift has also spotted Booking.com testing the startup’s services on its users.)

TourRadar
Vienna, Austria
Like a Viator for multi-day group tours and river cruises
Multi-day tours are a complex product to make bookable online, and consumer-facing TourRadar has spent a few years bringing inventory from more than 500 operators in the $55 billion industry online. Tour companies like Intrepid and G Adventures say that TourRadar has become a top online referrer of customers. The startup, which has 70 employees across Vienna, Brisbane, and Toronto and which has raised more than $6 million, recently began listing hundreds of river cruises — another fast-growing, but complex, product to sell.

Travefy
Lincoln, Nebraska
Like if Apple built tools for travel agents
Travel professionals preparing itineraries or quotes for clients have to juggle multiple booking sites, communication, and itinerary creation tools. Travefy, a seven-person startup that has raised $2.19 million, is bringing all of these tools into a single workflow for enterprise customers, including travel management companies like Travel and Transport, consortia like MAST, and host agencies such as the Gifted Travel Network. This year it will deploy professional payment collection tools.

Traxo
Dallas, Tex.
Like a Roomba for company travel data
Over time, electronic itineraries that constantly refresh with the latest relevant information will become the touch point that keeps travelers engaged with travel companies throughout a trip. Traxo automates data aggregation to help travel vendors make this idea a reality. Its tools help travel management companies like World Travel, Inc., expense management software firms like Chrome River, and corporate travel services providers like Cornerstone, remove the need for users to manually type in their travel and loyalty data into expense reports, duty-of-care applications, and other tools. This year the 15-person company, which has raised $11 million from TripAdvisor, Thayer Ventures, and others, plans to launch email inbox scanning.

Viajala
Medellín, Colombia
Like a Momondo for Latin America
While Skyscanner might be tops in Brazil and Kayak may lead in Mexico, Viajala is dominating travel price-comparison search in Chile, Colombia, and Peru. Credit the 13-person metasearch company’s success to adapting to local preferences with its unique click-to-call option, which lets customers speak to local online travel agencies to complete bookings (which is often a superior experience to using local mobile websites). Viajala, which has raised $540,000 to date, shines for its breadth of local inventory, with 39 API integrations (meaning, direct methods for retrieving data).